Crate training is one of the most difficult aspects of training a new puppy. Why? Not all puppies (actually, very few) like being enclosed in a cage alone and you’ll get the problem of having your puppy whining in its crate. It’s new, and new things for a small puppy can be scary!

As a new dog owner, you’ll need to ensure that you have the right supplies, including a comfy bed, and that you’ve purchased the right sized crate. But that’s not all! You’ll then need to ensure you’re crate training your puppy the right way. And, with that, will likely come a lot of whining.

Don’t worry; it’s normal. However, if it gets to be excessive, you’ll need to dig deeper and find out the reason why your puppy is whining in its crate and how to fix it. Follow along as we explore the reasons why puppies whine in their cages and a few tactics that will help you fix the problem.

Should You Crate Your Dog?

The AKC (American Kennel Club) recently published an article recommending crating your dog, regardless of how old they are. In fact, they said, “We recommend crate training every dog because you never know what’s going to happen in the future.” And, as they go on to point out in the article, crating your dog can make the difference between keeping your dog safe or putting its life at stake.

If you leave your puppy home alone while you’re at work, you might feel that they deserve to be able to roam freely around the house to play. While that’s true, and they do need some amount of space to walk around and play in, they shouldn’t be left to explore the whole house.

Because it’s dangerous for them.

Crating a dog and especially a puppy, means that you’re protecting them from causing damage not only to your home but also to themselves. When left alone, they can potentially bite cables, get stuck in wires, fall down the stairs, or encounter and ingest harmful chemicals.

Thus, instead of allowing them to roam everywhere they life, show them that you care and crate them. But keep in mind to do so with the proper training beforehand.

How to Crate Train a Puppy

If you’re wondering why is your puppy constantly whining in its crate and how to prevent it, you’ll first need to consider whether or not you’ve properly trained them to view their crate as a safe, enjoyable space to be.

We’ll get into why puppies whine in just a bit, but first, let’s just touch on the basics of how to crate train a puppy.

1. You must ease your puppy into the process.

Start by letting them explore their new crate alone, and don’t put pressure on them to go inside. They should also not stay there alone for an extended time if it’s the first time they’re put into a crate.

Instead, put a soft blanket inside, a few toys, and maybe even a couple of treats. Then, let them play in the crate and walk in and out until they’re comfortable with the space. Make sure you’re there to supervise and play with them while they’re getting used to the crate.

2. You’ll want to slowly work on closing the crate.

Leave them in there for about five minutes at a time after you’ve closed the crate. This should only be done after they’ve spent some time exploring the new crate. Allow your puppy time to feel comfortable in the crate first.

You should walk away from the crate after you’ve closed the crate door on your pet. This will help them to get used to staying in the crate on their own.

If they start to whine immediately, wait until they’ve calmed down to go and let them out. If you open the crate every time they start to cry, they’ll use that as a tactic against you, and they’ll never learn not to whine in their crate.

3. You need to practise patience with your puppy.

To properly train a puppy, you’ll need to remember that they are babies. If they’re whining, it’s likely because they’re hungry, bored, or scared. Be patient with them as they learn to view the space as a special place to relax and rest.

Why Do Puppies Whine in Their Crates?

To put it simply, puppies whine when they’re scared or uncomfortable. When you start to crate train your puppy (or even an older dog), if they start to whine immediately upon putting them in the crate, it likely means that you’ve moved too fast.

Go back and introduce them slowly to the crate. Ensure that they have a warm blanket that smells like you, a few toys, and some treats. It can also be a good idea to feed them inside the crate. You can leave the door open while they eat; the idea is just that they’re eating inside of the crate and associate it with positive activities.

Other reasons why a puppy might whine in a crate include:

The last one is by far the most likely in most cases. However, fear and anxiety are normal in young pups as well. If you notice your puppy exhibiting other signs of anxiety such as yelping, panting, and urinating in their crate, we suggest you pay your vet a visit and explain what’s going on. It might be a more severe case of anxiety that needs to be addressed.

If that’s the case, try to train your puppy to be alone in the cage for five to 10 minutes at a time. When you get back, give them a treat if they didn’t whine. Then, continue that exercise while increasing the intervals of time up to 15 minutes, half an hour, and so on.

Lastly, it’s important to know that puppies are very similar to little kids in that if you shut them inside of their crate when all they want to do is play, they’ll probably throw a temper tantrum as a small child would. This likely includes whining, crying, and perhaps even growling.

When they start acting out like that, simply ignore them! Don’t look at them or respond to them until they’ve calmed down. You’ve to let them learn to behave or they’ll end up like a spoiled brat, just like children!

How to Prevent a Puppy From Whining in Its Crate?

If you’ve worked hard to crate train your puppy and they’re still whining, you’re going to have to change your tactics.

First, try to find the root cause of why they’re whining. If you notice that they start to whine at around 5 am and then immediately rush to go out and use the bathroom, you might have to adjust their potty schedule to ensure that they’re going right before bed (or, you’ll simply have to start taking them out more often until they’re older).

Likewise, once you’ve identified the reason for the whining, work with them patiently to teach them better habits. If they whine because they’re scared, you might throw a blanket over the crate at night to keep lights and sounds from scaring or bothering them. If that doesn’t work, try moving the crate closer to your bed so that they can hear you nearby and feel comforted.

Separation anxiety, as mentioned, is quite common. If that’s the reason for the whining, you can employ the tactics mentioned above. Train your dog to be alone in the crate for five minutes at a time. Then, walk back into the room, let them out of their crate, and try to act as normal as possible.

Don’t cause a lot of commotion, which might over-excite them. Instead, give them a treat, tell them they’re a good puppy and go on about your business as usual. They’ll get used to the idea of being kept in a crate over time.

As mentioned, crate training your puppy is one of the most difficult tasks as a new dog owner. Once you master this, you’ll be good to go regarding other training tasks such as learning commands.

If you’re still struggling to figure out why puppies whine in their crates and why yours particularly is whining a lot, you can start by visiting the vet. If it’s not due to an underlying medical condition, it’s likely just because they’re still adjusting.

I started out with the intention of finding out all I can about dogs because I love dogs but it has now turned into a mission to share my findings and experience with as many people as possible. Dogs are loyal animals but they also have their needs and it's our job to keep them happy and healthy! I hope you will find the information to be useful and thanks for stopping by! 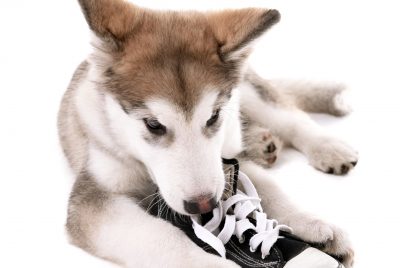 link to When Do Puppies Stop Chewing? 5 Tips To Stop Your Chewing Problems!

When Do Puppies Stop Chewing? 5 Tips To Stop Your Chewing Problems!

We often associate puppyhood with playfulness and we are not wrong about that. However, you may have noticed your puppy behaving more aggressively than usual and your valued ... 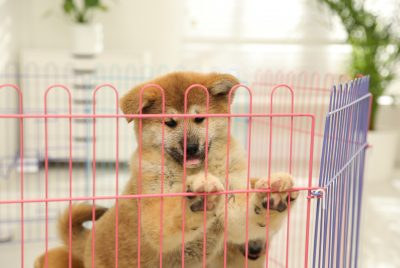 link to Leaving Puppy in Playpen While At Work – Is This Harmful?

Leaving Puppy in Playpen While At Work – Is This Harmful?

Managing a busy schedule while having a dog is a huge responsibility for anyone. If only we could bring Fido to work every single day, why not, right? ...

link to How Long Does It Take For Puppies To Potty Train?

How Long Does It Take For Puppies To Potty Train?

Dogs may be man’s best friend, but they’re not always our most obedient friends. Potty training your dog can be difficult and frustrating for both you and the ...
About Sheena Mai 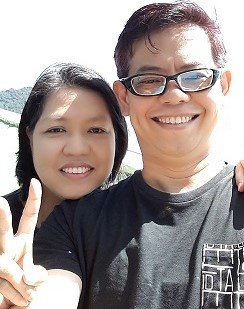 I'm Sheena Mai, the gal behind Woofie Magazine. I've always loved dogs and I want to share all that I've learned and experienced about dogs. Dogs are very loving animals and will be any man's best friend. Through this website, I hope to be able to help dog lovers learn all about taking care of dogs and how to make our furkid happy. I post articles weekly to share information, so do remember to check back at our website regularly to learn more about your loving best friend.